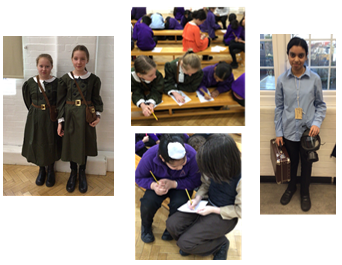 On 9th January the children in year 6 took part in an Evacuation Day as part of their launch pad into their topic of World War II. On this day children were able to dress up as if they were a child evacuated from London to the countryside during the 1940s.  Throughout the day the children completed different activities to support their                understanding of the experiences a child during this time period would have gone through when initially being evacuated.

The children ‘boarded’ the train from London to Little Weirwold, and played games of Tic Tac Toe and Beetle with other evacuees in the carriages.

The children created their own evacuee cards that children would have been given once they had met the billeting officer. These would then be given to their host families.

They also began reading the story ‘Goodnight Mr Tom’ which they will be reading throughout their learning over the spring term. The story will be used as a stimulus for their own writing.

The children learnt about Anderson Shelters and made models of ones they would have wanted built to protect them in the event of an air raid.